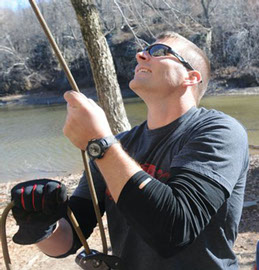 In addition to teaching Outdoor Education, he is the Head Football Coach at Rogers High School.  Shawn was named to “Who’s Who Among America’s Teachers” in 2002 and 2005 and was named Coach of the Year in southwest Missouri in the Big School Division in 2008.

Shawn is a certified archery instructor, Hunter Education instructor, and Boating Education instructor. He has also attended numerous seminars for Fly Fishing and Casting, Rock Climbing, and Canoeing. He is a member of Trout Unlimited, Sierra Club, Nature Conservancy, National Wildlife Federation, The Wilderness Society, American Alpine Institute, and Access Fund. His passion for the outdoors led him to Arkansas and to co-found Outdoor CARE. He has been married to his wife Hannah for 13 years and has three children: twin boys, Brooks and Connor, and daughter Perry. 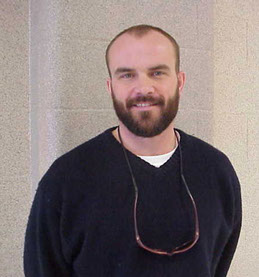 Jeff Belk, co-founder of Outdoor CARE, lives in Fayetteville, Arkansas, with his wife and son in the beautiful Ozark Mountains. He graduated with a B.S. in Zoology from U of A in 1995, and M.A.T. Secondary Science from the U of A in 1998. He received his Wilderness Education Association National Certification for Outdoor Leadership in 1996. In 2004, he received the Arkansas Environmental Education Association’s Environmental Educator of the Year, Arkansas Wildlife Federation’s Conservation Educator of the Year, and National Wildlife Federation’s Conservation Achievement Award. In 2007, he received the RHS Teacher of the Year Award.

He does consulting work for Camp War Eagle, Beaver Water District, and the Arkansas Game and Fish Commission. He is a member of Arkansas Environmental Education Association, Trout Unlimited, Wilderness Education Association, Sierra Club, The Nature Conservancy, and the NW Audubon Society. He has also developed the curriculum for a local summer day camp (Mountain Brook Camp) and established a guide service for fishing/hiking/camping/canoeing (Mountain Brook Outdoor Adventures). He is currently on the Rogers/Lowell Chamber of Commerce Greenways and Trails Committee, Trout Unlimited Chapter 514 Board of Directors, and Hobbs State Park Education Committee.